“I found myself wanting to create a response to the ever-increasing, self-imposed requirement that we use each spare second to be checking our phones, or busying ourselves with information that may, or may not, even have value to us personally.” 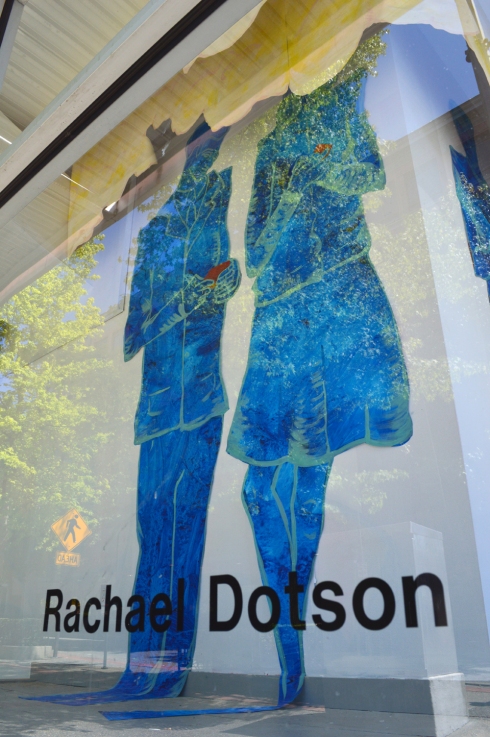 Stretching across the large white walls of a storefront window, towering blue figures stare into their handheld devices, unmindful of their surroundings… halfway here, halfway there.  Folks continuously stream past the exhibit with their thumbs moving faster than their feet typing away on their pocket computers. 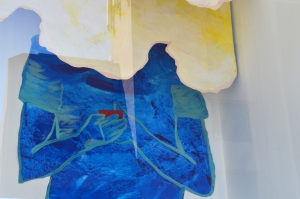 Detail of installation by Rachael Dotson

This installation, created by artist Rachael Dotson, sits in an ideal setting for an artwork depicting our increasingly face-paced, “connected” lives.  Dotson has covered the ceiling with glowing clouds in layers of paper cutouts.  The elongated figures are painted in a loose illustrative style.  Their heads are literally in the clouds, bodies cascading down, feet spilling onto  the floor.  Their bodies are a cool, watery blue.  Their phones are blood red.  The effect is something strikingly similar to an average daily commute in a rainy Northwest city.

Perhaps on your next trip through downtown Tacoma, take a moment, stop and smell the farmer’s market roses, and enjoy this fantastic, ethereal installation.  See more of Rachael Dotson’s work at her website www.greenapple-studios.com

The current round of Woolworth Window exhibits will be on display through the third thursday of August.