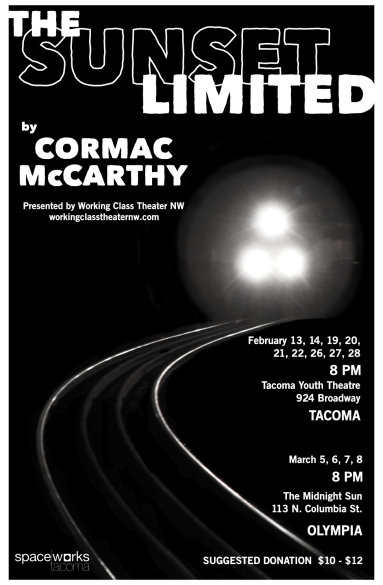 This February, Tacoma’s Working Class Theater NW presents its second full-length production, Cormac McCarthy’s The Sunset Limited.  Managing Director Christina Hughes explained, “after the successful debut of David Ives’ The School for Lies last September, we are taking a break from the satirical farce to present something more suited for the depths of winter: a meaty play that feeds your brain while your body waits for the days to lengthen and the temperatures to rise.”

In The Sunset Limited, Cormac McCarthy, award winning author of The Road, All the Pretty Horses and No Country for Old Men, explores religion through the dynamic lens of American race relations. Directed by Tim Samland and starring local actors Aaron Bredlau, playing the role of White, and Jack House, playing the role of Black, The Sunset Limited opening scene begins immediately after Black rescues White from jumping in front of a train. From that chance meeting, the two men explore the depths of faith and conviction that have led them down such opposite paths.

The Sunset Limited opens in Tacoma on February 12, at 8:00 p.m. at 924 Broadway (Tacoma Youth Theater) with a pay-what-you-can preview. The show continues on February 13, 14, 19, 20, 21, 22, 26, 27 and 28, before moving to Olympia’s Midnight Sun for a run March 5, 6, 7, and 8. All performances are at 8:00 p.m. Suggested donation is $12 for general tickets and $10 for students, seniors, military and union members. Tickets are available online for both the Tacoma and Olympia performances, for or at the door. Please email workingclasstheaternw@gmail.com for inquiries regarding group discounts.