As part of the latest round of Artscapes, the Tollbooth Gallery has be transformed by the Personal Power Company (PPC) with fantastical paintings and a compilation of videos that highlight local artists.

We recently caught up with Kris Crews—one of PPC’s collaborators and Spaceworks’ official photographer/videographer—to ask him about PPC and what they’ve done with the space.

Spaceworks (SW): So how do you describe the Personal Power Company to others?

Kris Crews (KC): It’s important to note that the Personal Power Company is not anything in and of itself. It isn’t a business or a structured entity, but it is a presence that stands in opposition to the media networks of the day. It is like an old mirror that alters the light which hits it, and it is like a window into another dimension that isn’t necessarily real, though aspects of it are more real than what we (the general public) accept to be real.

SW: You’ve had work featured in the Tollbooth Gallery before. How is this round different?

KC: In 2012, I showed a loop of 3 years of Galen Turner’s infamous Bike Jump event, presented by 2nd Cycle. That was awesome and was up for the greater part of a year. I think there were several noise complaints, and I love that. The noise was from the sounds of shattering neon glass and screams in slow motion along with the screeching of bottle rockets. Galen brought his glass blowing class by the booth one day and blew all of their minds.

Another time I showed a very psychedelic video showing Allan Boothe’s mind’s eye opening and Joel Myers doing yoga inside of a rainbow while divine energy descended into his crown chakra.

It could be said that this current installment at the Tollbooth brings it all together. 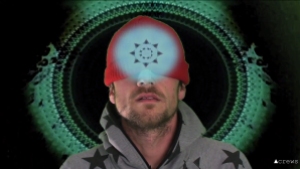 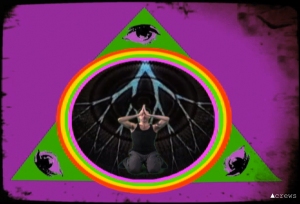 SW: Why did you choose the videos that are currently playing at the Tollbooth?

KC: This present loop is an offering to Tacoma—specifically, downtown Tacoma, the heart of the city.

The first video in the series, “You’ll Like Tacoma,” is a montage of outstanding Tacomans and inspiring events, such as the Tacoma Lumens Festivus and the Downtown Block Party. You see Adam Ydstie, from Urban Grace and The Warehouse buying coffee at Cosmonaut back in 2009 (when it was called Satellite). It’s awesome because that shot of Adam at Satellite was taken when he and his close friends were first envisioning what would become The Warehouse, an arts and event planning company that is deeply rooted in and devoted to Tacoma. Every person you see in that first video has major significance. It’s my way of saying that we all—all of us who are actively co-creating—are a part of the PPC.

The second video is a music video for the song “King of the Jungle” by Humble Cub, a tongue-in-cheek declaration of personal power. What is the jungle? Is it the city? The Goodwill bins? Allan Boothe, of Humble Cub, doesn’t care. He is the king of his jungle and if you are in it, he may just eat you when he’s hungry. Ruling the jungle along with Allan, we see other band members and close friends including Rick King, owner of Guitar Maniacs on St. Helens, just 2 blocks up from the Tollbooth. Artist, Jeremy Gregory (Candy Teeth Creative), is featured juggling machetes while skateboarding by the infamous Tacoma Graffiti Garages. Patrick Doherty, of local band Wheelies, moves many of the shots along via his BMX trickery.

The 3rd and 4th videos in the loop are special shout-outs to these two specifically [Jeremy Gregory & Pat Doherty], with music by Geoff Weeg (Off Model), who played drums on “King of the Jungle.” 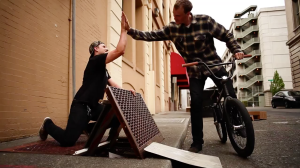 SW: Tell me about the art on the exterior of the Tollbooth.

KC: The painting on the Tollbooth’s exterior is a collaboration between myself (the clouds with eyes and emanating beams of rainbow colors), Jeremy Gregory (faces emerging from abstraction), and Geoff Weeg (blue birds of inspiration).

SW: One of the exciting (and perhaps challenging?) things about the Tollbooth is the opportunity for an artist to make use of both still and video art. How do these interact in PPC’s latest installation?

KC: The videos and the music hopefully evoke a sense of wonder. It should inspire people to realize their creativity. Seeing Pat Doherty riding his BMX bike through downtown makes you see this urban terrain with a new perspective on its possibilities. Jeremy Gregory juggling with the city behind him is purposefully recorded in slow motion to make it seem like he is bending time and gravity to his will, which I think he does.

I want people to have a holy suspicion that God is speaking directly to them. The artwork on the Tollbooth itself is there to help reinforce that idea. Though subtle, I think that people walking by catch what they need to see or hear at that moment, and I believe it’s no coincidence at what point in time they happen upon the experience.

SW: What do you enjoy most about having art at the Tollbooth Gallery?

KC: The ability to share art with random people as they walk by is exciting to me. When I had videos up in the Tollbooth in the past, I would hear stories of how people happened upon it and had a special moment that made their day.

SW: Thank you for your time, Kris We look forward to your upcoming projects!

The Personal Power Company’s installation at the Tollbooth Gallery runs 24 hours a day, 7 days a week through Aug. 21, 2015 on the corner of Broadway and South 11th in downtown Tacoma.

Kris Crews is a professional filmmaker, photographer and teacher at Annie Wright Schools. Residing in Tacoma since 2008, Crews has taken an active role in documenting and contributing to the local art and music community. As an early participant in Spaceworks Tacoma’s Creative Enterprise Program, he launched the Personal Power Company with his wife, Bridgett Crews, and several close friends as a means to produce collaborative multimedia art with the goal of further igniting creative expression in the city.