Japanese haiku is one of the world’s most popular forms of poetry. With a basic structure of three lines containing 17 syllables written in a 5-7-5 pattern, it is simple but not simplistic – when an idea is compressed into so few words, a skillful haiku packs a wallop. When haiku is accompanied by art, as in Brad Dinsmore‘s installation, “Doves and Ravens”, at the Woolworth Windows at S. 11th & Broadway, the effect is one of mind expansion as words, freed from the page, take flight in the viewer’s imagination:

Dozing off in grey
Laodicean birds wake
To a brighter day.

Dinsmore’s haiku also provides his artist statement. The poem is intimately embedded in the visual portion of his work, the juxtaposition of birds – one dark, one light – rich with symbolism. The avian imagery immediately invites contemplation as ghostly doves are seen to emerge from the negative space between the black birds. A deeper reading recalls the story of Noah who, after 40 days of rain sends out two birds to find dry land, first the stalwart raven (who can feed on carrion and) does not return, and then the dove who after being sent out twice returns “and in her mouth [is] a freshly plucked olive leaf,” a sign of resurgent life.

Centuries ago, classical practitioners of haiku augmented their poems with art and calligraphy, amplifying its ambiguity. Dinsmore’s artwork also rewards close viewing with layers of meaning. The installation contains a triptych of birds: two canvases feature both black and white silhouettes, but one is of only doves, most of which are curiously flushed pink as if signalling inner transformation. The visual movement of the birds is toward the right where a flock of intermixed corvids and doves painted directly onto the wall creates a dynamic flurry that stretches around a corner and culminates in a three-dimensional view from outside.

“I thought a poem would provide the right amount of insight and intrigue to the passerbys on Broadway,” says the Tacoma-born artist. “Though I hadn’t written a haiku in more than a decade, it seemed to fit the work quite well.” The 3-line poem fulfills two tenets of the classical form: “Haiku traditionally contains a kigo, a word or phrase that symbolizes or implies a season….The kigo in my artist statement is gray, for our long gray season. 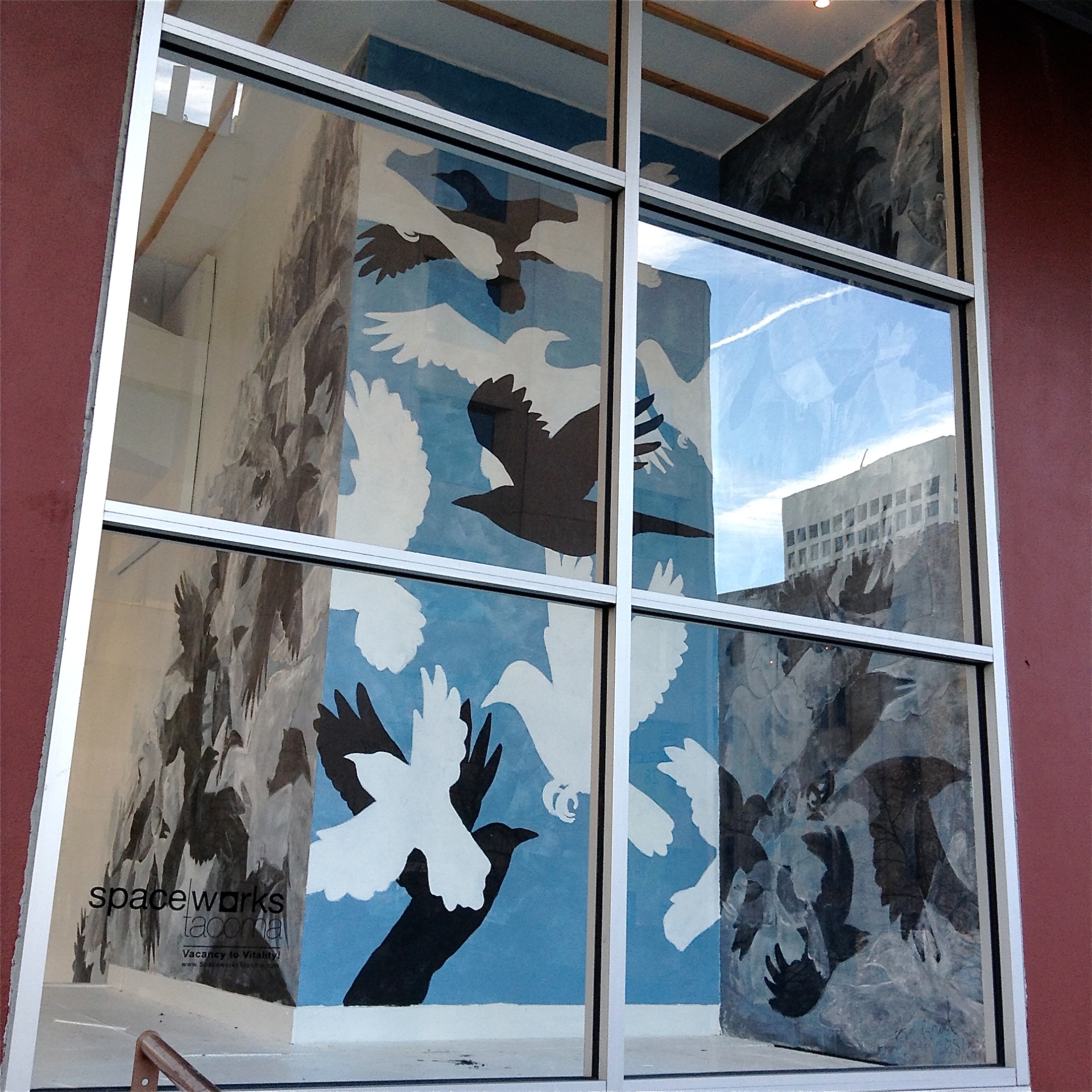 “Traditional haiku also contains the idea of kiru or ‘cutting’,” where the wording provides a breaking point between contrasting ideas, says Dinsmore. In “Doves and Ravens” there is a multiplicity of contrasts: darkness and light, grayness and blue sky, dozing and wakefulness, anticipation and fulfillment, symbolic death and life. “My attempt to capture this in both my haiku statement and large corner painting emerges when the ‘Laodicean birds wake’ from their slumber in gray” and proceed to fly off the canvas, he explains.

Dinsmore earned his Bachelor of Fine Arts degree at Redlands University in California, and a Master of Fine Arts degree at Washington State University. His artwork demonstrates considered thought balanced with a lack of cynicism. “In 2009, while doing research in philosophy, proverbs, art, and religion, I began to see the world differently. I have found freedom, the fertile ground, where seeds of all sorts grow in spontaneity and love.” View Dinsmore’s “Doves and Ravens” when you have time to unpack the meanings that fill his 3-line poem and intriguing paintings, like a poetic aviary encased in glass.  -Lisa Kinoshita