Put it on your bucket list – All Things Considered 9: Basketry in the 21st Century is a blockbuster exhibition presented by the National Basketry Organization (NBO), opening July 20 at the American Art Company in Tacoma.  This biennial exhibition, the ninth in a series, represents the full spectrum of contemporary basketry currently being executed by well-known and emerging artists in the United States.  Showcasing excellence in creative exploration, technique, and craftsmanship, the 70 artworks in the exhibition were juried by Lloyd Herman, the founding Director of the Smithsonian Institution’s Renwick Gallery from 1971 – 1986.

This exhibition poses the question: What, exactly, is a basket?  Traditional craft has gotten a bad rap of late: In the day of laser-drawn graffiti, filmmaking via iPhone, and 3D-printed lingerie, time-honored forms such as basketmaking hold about as much sex appeal as grandma’s doilies.  But wait – while new technologies have been spewing out mountains of product to gratify the lust for eye candy, virtuosos in the art of basketry have slowly and brilliantly been redefining their oeuvre, piece by hand-made piece.

All Things Considered 9 opens in conjunction with the 2017 National Basketry Organization conference in Tacoma, featuring guest speakers and workshops led by masters of the craft.  Spaceworks is welcoming the NBO with an Artscapes installation, Gathering: Six Northwest Basketry Artists, on view in the Woolworth Windows through August 17.  The installation features woven works (including non-basketry pieces) by six NBO-member artists with distinct styles that represent the diversity of traditional and non-traditional work being made in the Pacific Northwest.

Armature, a trilogy by Jill Nordfors Clark, is made from lashed reed, layered hog casing, leaf skeletons and bones.  “Hog gut, an unusual material for basket making, is white, flexible, and opaque when wet, but translucent, stiff, and parchment-like when dry,” she explains in her artist statement.  “I stitch with hog gut, over a mold, threading the wet tubes on a large needle and working needle lace stitches over and around natural and found materials.”  The effect is of an anthropological poem, a container for gathered rituals and memories.

Staked Out, by Katherine Lewis, is a vertical sunburst with radiating spokes of undyed willow.  The artwork shows off not only the natural color variations of the tree fiber, but the way the structure of a basket is developed.  Lewis grows and crafts the willow for her baskets at her farm in Mount Vernon, WA. 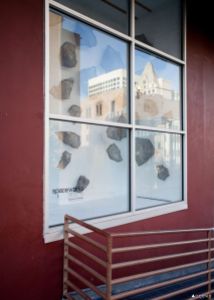 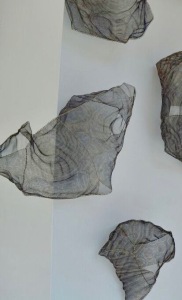 Lanny Bergner creates a philosophical conundrum in Primordial Muse: Dark Matter/Grey Matter, made from flame-treated stainless steel mesh and wire.  The ethereal, see-through forms he shapes out of black mesh suggest a primordial explosion mediated through the artist’s own intellectual determination and creative activity.  Bergner writes that he uses only a linesman’s pliers and cutting shear, and “inventive yet simple joining techniques to transform mesh into semi-transparent organic structures, vessels and geometric constructions.”  These forms “engage the viewer with glimpses into a world where nature and manmade material coalesce.”

Twists is a trio of intriguing biomorphic forms by Danielle Bodine.  A combination of closed and open forms suggests sinuous vines and vegetation that might populate a fecund and enchanted forest.  Yet the inspiration for the work actually came to the artist as she was doing yoga, stretching her own body into elongated poses and twists.  Bodine employs materials such as rattan, cane and cast mulberry paper with applied surface techniques of printing and painting to create a multi-layered and engaging visual experience.

“Life flows through us and eventually into our artwork.  Our thoughts are revealed,” writes Dona Anderson.  The Seattle-based artist displays a playful side in two energetic sculptural works, Letters Totem and RedX.  Made of cardboard and kozo paper wrapped over flat reed, the pieces display a lively interest in words and symbols, and how they connect.  Anderson used a Sharpie pen for mark-making on Letters Totem, and paint on cheesecloth for RedX.

Of all the works shown in Gathering, Peeta Tinay‘s Lidded Baskets are the most firmly grounded in tradition.  Harmonious and graceful proportions are a hallmark of the Tacoma-based artist’s work.  Tinay is known for her bold experiments in scale, and precise, richly woven textures.  A vessel featured on the cover of NBO Magazine in 2015 celebrates her mastery of deeply rhythmic patterns accentuated by vivid shots of color. 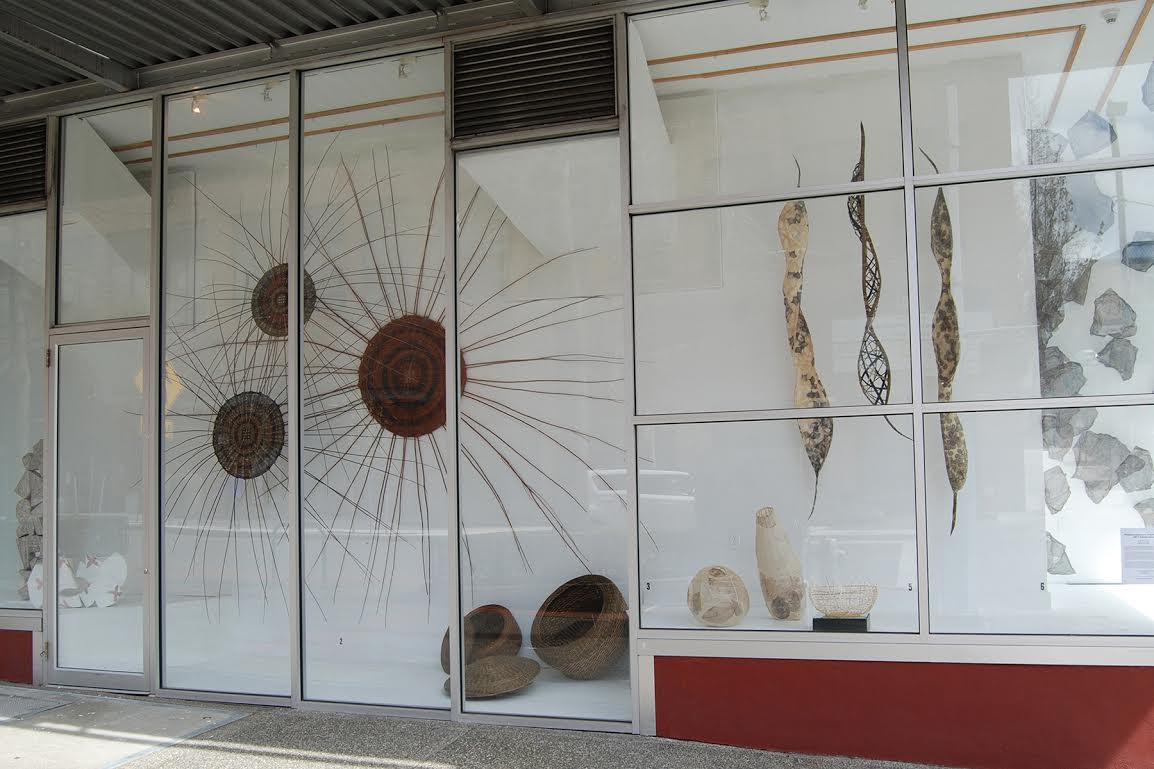